Ever wonder what John Lennon’s piano looked like? This is the piano he used to compose “Imagine” and a lot of his other earlier work post-Beatles. 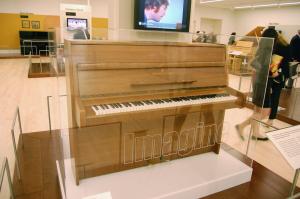 It was bought in by George Michael when the owner put it up for Auction in 2000. He paid around $2 million for it. It had been in the Beatle’s Museum in Liverpool.

After Michael bought it, he supposedly used it for a song a record not long after. Not sure what that recording would be; His next recording after 2000 was 2004’s Patience. By that time the piano was already back in the Liverpool museum.

Although, there is a song on that record called John And Elvis Are Dead. No piano on that track, though.

Sidenote: A lot of people think that Lennon composed “Imagine” on his famous white piano. He performed it on that the piano, which he had bought for Yoko for her birthday. But he actually composed it on this upright.